Well, we are back in Omaha after our 10 day TEXAS adventure, we came home to a HOT house. AC quit working while we were away and our house is 94 degrees. The repairman - nice Francisco - came today to fix the problem and we are now down to 88. I think we will need a new unit soon as we have seen Francisco 3 times this summer. The heat made me think of this yummy dessert we had at my brother's house. His wife Stacy - made a Banana Pudding different from the one I make. I make one with cooked pudding and meringue but Stacy's was very summery and very refreshing! I will share both with you!

This version is from my mom who is a great cook. My dad and my husband request this often for Father's Day or any special occasion! 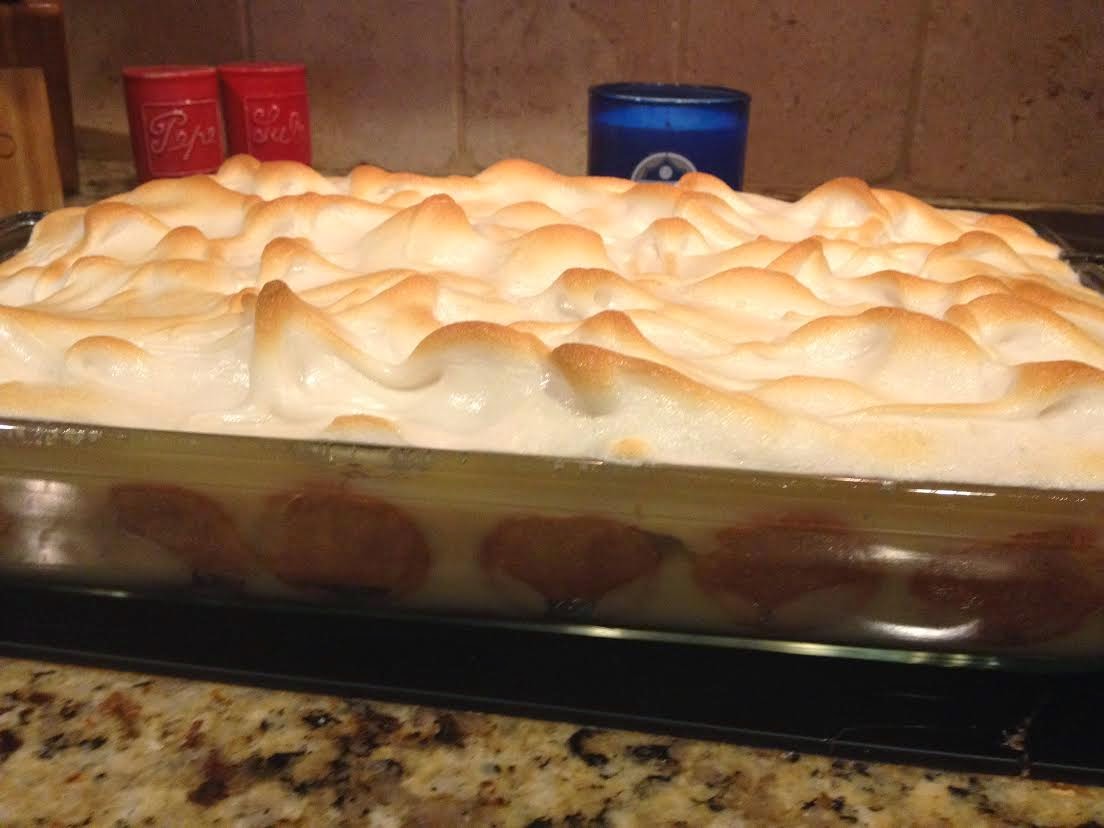 Separate eggs. Beat egg yolks with a little of your milk. Reserve egg whites for meringue. Put flour and sugar in a saucepan. Slowly pour rest of milk into flour/sugar stirring to avoid lumps. Pour egg mixture through a strainer into flour/sugar/milk mixture. Heat on med/med high heat stirring constantly. Mixture will begin to thicken after about 15 minutes. Add vanilla and butter. When butter is melted and a desired thickness for pudding has been reached, take off heat. If gets too thick - can always add a little milk. (This is the same mixture my mom makes for her chocolate pies and her coconut pies with a little adjustment)

Line a 11 x 13 glass dish on bottom and sides with Nilla Wafers. Add a layer of sliced bananas and a layer of cooked pudding. Repeat then add Meringue.

Whites are at room temperature by now. Beat with mixer and add 1 tsp Cream of Tartar. Beat at high speed until whites form a stiff peak. Add sugar and vanilla and beat to get a little stiffer peak. Spread over pudding and seal edge. Bake at 350 just for about 10-15 minutes to brown meringue.


Serve warm or chill and serve cold. My hubby loves it cold - so do my girls!

*Numbers in parentheses are for a square pan. The rest is for a glass 11 x13.

**Chocolate pie - add 2 or (1 for one pie) heaping Tbsp cocoa with the flour mixture
**Coconut pie - when desired thickness of pudding is reached, add 1 1/2 cans ( 3/4 can for one pie) of coconut and sprinkle some of the coconut on top before browning meringue

Mix pudding according to directions. Add condensed milk and Cool whip to pudding mixture. Line bottom and sides of a glass 11 x 13 with vanilla wafers then a layer of sliced bananas on bottom then layer of pudding. Repeat. Top with crushed vanilla wafers. Chill!

Printable Version
Posted by Susan at www.ugogrrl.com at 12:52 PM