Most of you might not know but I love QVC.  I don't order daily but I do order regularly.  I find they have great products and great prices.

I recently ordered a pressure cooker from them.  I also ordered a cookbook - Comfortable Under Pressure by Meredith Laurence.

I love the pressure cooker.  I am still figuring it out but I am loving it so far.  I have made a soup, a roast and veggies and potatoes.  I think the pressure cooker will be great for the holidays when I am using both ovens and possibly my Crock Pot too.

Everything has been yummy.  I am going to share the recipe for the soup - Potato and Corn Chowder. I thought this soup was fabulous!  I think you could totally adjust this soup to the stove top - maybe a little less liquid.  Pressure cookers are known for needing at least a cup of liquid or more. 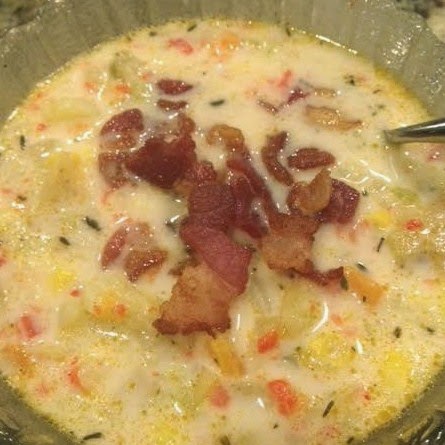 Preheat the pressure cooker using the BROWN setting.  If no brown setting or doing on a stove top, brown the bacon until crispy.  When crispy, remove bacon pieces with a slotted spoon.  Add onion, carrots, celery, peppers, garlic, corn and potatoes to the cooker.  Continue to cook for 2-3 minutes and then sprinkle with thyme, salt, cayenne, flour and pepper.  Stir well to distribute evenly over vegetables. Add the chicken stock and lock the lid in place.  Pressure cook on high six minutes.  Release the pressure with a quick release method and carefully remove the lid.  Stir the soup and use a potato masher to crush some of the potatoes.  Add the half and half or cream.  Season with more salt and pepper if needed.  Garnish with the reserved bacon pieces.  Serve with green salad and crusty bread.

TIP - if planning to serve right away, half and half works great.  If you want to re-heat the sopu for later on or plan on having leftovers, you might use cream instead.   Cream doesn't separate when it gets reheated.

**There are no instructions for adapting to stove top.  I would brown bacon in a large stock pot like mentioned above.  Remove pieces and saute' veggies and corn til tender.  I might cook the potatoes separately and add them in. Add the chicken broth and spices and simmer.  I would add cream and simmer a bit longer

Posted by Susan at www.ugogrrl.com at 6:30 AM