This is the last ingredient for Merry Mondays - cinnamon. I love this recipe and I know you will too!

This is a favorite recipe-anyone that tries these LOVES them. Amy made these for me for a bridal shower she had for Chris and me when we were getting married - about 20 years ago. Amy is from Nebraska and I met her when living in Dallas. She still lives in the Dallas area and I live in Nebraska - hard to believe.

These blintzes are a little time consuming to make but not hard to make. The BEST thing about them is that I make them ahead of time and freeze them and then take them out when I need them - Christmas morning or just breakfast for my girls! I know you will love them! 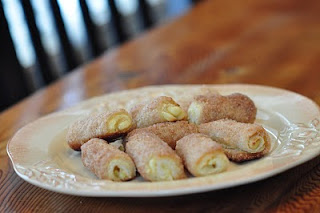 Cream cream cheese, yolks and sugar and set aside.


Mix: (will probably need more of this mixture)

Melt a stick of butter in another bowl.

I do this recipe in an assembly line - say 4 at a time. Cut crusts off bread - I stack up 4-5 at a time and cut the crust off; using a rolling pin, roll out each slice of bread as flat as possible; spread cream cheese mixture on each slice; roll up jelly roll style with mixture inside bread and then dip in melted butter and then the cinnamon sugar mixture; place on a cookie sheet lined with wax paper and freeze. When frozen, I place all of the blintzes in an air tight container and keep in the freezer until needed. When ready to eat, thaw 15 mintues and then bake at 400 for 15 minutes.

*when i take mine out of the freezer before storing them - while frozen, I cut them in half so I have small bite size blintzes.

Printable Version
Posted by Susan at www.ugogrrl.com at 9:05 AM

Mmm, they look great! I can't say I've ever had a blintz, but I really should try them.

Oh my word how neat are these. I have never heard of them but I am definitely saving this recipe! Thanks so much for sharing.

Oh wow! My family would love these!

My kids would flip for those!!!! I have to try them.

Loved your recipe! It will definitely be a keeper in our house!!