When my girls were little, any time we had breakfast for dinner, they called it "Backwards Night".  We did this on occasion with pancakes, waffles, breakfast tacos, etc.  I thought we would have "Backwards Night" tonight with Baked French Toast and bacon.  This meal was a huge hit with everyone.  They LOVED the french toast!  I got this recipe from my good friend Michelle  - we should have tried this sooner! 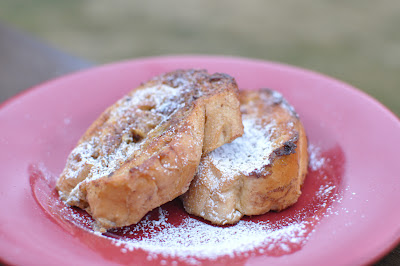 Melt butter in 9 x 13 pan.  Mix milk, sugar, eggs and cinnamon in a mixing bowl.  Soak bread slices in milk mixture and place in melted butter.  Sorinkle lightly with cinnamon.  Bake at 400 for 20 minutes and flip slices. Bake until brown on both sides.  Less crunchy, bake at 350 for 30 minutes.  Sprinkle with powdered sugar.  Served with maple syrup.

Printable Version
Posted by Susan at www.ugogrrl.com at 8:37 PM