My friend Diane gave me this recipe about 25 years ago.  I have made it consistently over the years as it is easy and a different spin on a quick spaghetti night.  I usually serve it with a green salad and garlic bread.  My family enjoys this different version.  This is a great addition to a busy week night.

I did "Google" the recipe.  Being from Texas, I know who Don Meredith is. I just wanted to make sure this was the name of this casserole... and it is.  I did see it also referred to as "Mrs. Don Meredith's Cowboy Casserole".  If you don't know who Don Meredith (1938- 2010)  is, he grew up in Mt. Vernon, TX, played football  for SMU then for the Dallas Cowboys.  He then went on to be a commentator! I always so enjoyed "Dandy" Don Meredith. 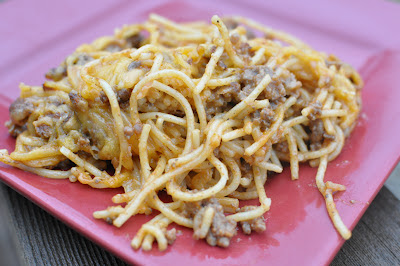 
Cook spaghetti until just tender. brown onion in butter. Add ground round and cook until browned. Add salt, pepper and seasonings to taste. Add mushroom soup, tomato soup and Worcestershire sauce together, cover and simmer 15 minutes. Put into a casserole,top with cheese and heat in oven until cheese melts.
Printable Version
Posted by Susan at www.ugogrrl.com at 7:10 AM

sounds yummy! I often times have all the makings for spaghetti except the sauce, so in that event, i will give this a whirl! anne