Two of our girls are home for summer.  I made banana bread recently but wanted to try a good zucchini bread.  Susan teaches at preschool with me.  She sent me her a picture of her grandmother's recipe.  I love the spills on the recipe.  I have lots of recipes like that - they are "well-loved"!  I especially like the ones in my grandmother's handwriting... or my mom's handwriting.  Those are extra special.

I used her recipe as is - except I used less cinnamon and I did a cup of semi-sweet chocolate chips instead of walnuts.  We loved it!

I made four mini-loaves.  I love planning ahead and freezing a few loaves for later ... or giving one or two to a friend!

I will totally make this recipe again!  The sweet crunchy edges were my favorite!

P.S.  My chocolate chips mainly sunk to the bottom.  I was okay with that.  But, if you don't want them to sink to the bottom, toss them in a little flour before adding them.  This will help suspend them in your batter! 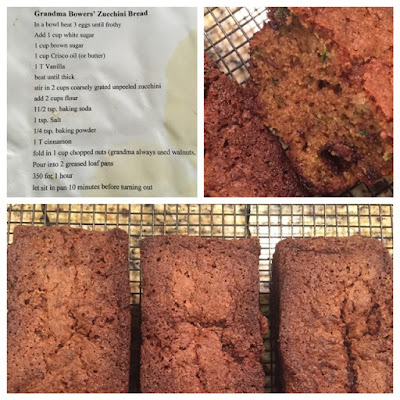 In a large bowl, beat eggs until frothy.  Add sugars, oil and vanilla, beating until thick.  Stir in flour, soda, salt, baking powder and cinnamon.  Stir until combined.  Fold in nuts or chocolate chips. Prepare loaf pans with cooking spray.  Pour mixture into loaf pans and bake.  If one large loaf pan, bake for about 50 minutes - to an hour.  (I used four smaller pans - and baked 30 - 40 minutes or until toothpick inserted came out clean.)  After baking, run knife around the edge of the bread/pan.  Allow bread to sit in pan for about 10 minutes before turning out.

Printable Version
Posted by Susan at www.ugogrrl.com at 6:30 AM