I do want to apologize for not posting much this week. We went to Texas to see mom and dad. I had great plans of doing a post or two from their house... but I just didn't do it. It was great being in Texas with friends and family. Dad is at the end of his radiation - very tired but hanging in there. He will start chemo in about four weeks. Thank you for the continued prayers.

Just before we left, I made a new fun bar recipe that my friend Anne over at Annie Bakes suggested. She got this recipe for Chocolate Cheerios Marshmallow Bars from Pillsbury and they had cut there bars into hearts. We loved this new recipe. Our oldest daughter had some friends over and between the teens and the family - we ate every bite. 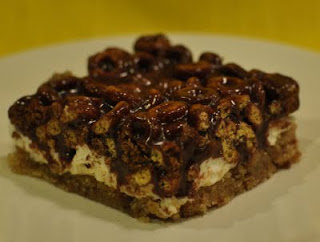 Preheat oven to 350 degrees. Line bottom and sides of a 9 x 13 pan with foil. In a large bowl, mix all crust ingredients except marshmallows with electric mixer on low speed until crumbly. Press firmly into bottom of pan.

In a large saucepan, place all topping ingredients except cereal. Heat over medium-high heat just until chips are melted (7 to 8 minutes), stirring constantly. Remove from the heat; stir in 4 cups cereal. Immediately spoon warm topping over marshmallows; spread to cover. Cool completely, at least 1 hour.

Printable Version
Posted by Susan at www.ugogrrl.com at 8:05 PM

Great flavors in these! I can see why you guys ate them all!

These sound scrumptious, I really need to try them out!

Hey--thanks for the shout out! we love these too, anne

love how you jazzed up those cheerios! looks amazing!

Oooo! Looks like a delicious alternative to Rice Krispies treats!