Looking for new recipes to try to keep me sane during this crazy time.  I follow Joanna Gaines and Magnolia on Instagram.  I love that Joanna has been sharing recipes on Instagram.  She and her daughter filmed her making Zucchini Bread.  It is their new favorite.... banana bread.  She said it is in in her new cookbook, Magnolia Table Volume 2.  I took notes, made the recipe and we enjoyed each piece just as Joanna suggested... warm with butter. 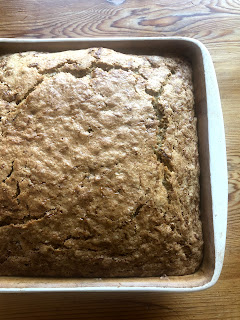 Using a food processor or hand grater, grate the zucchini using the large grate.  Joanna suggests about 3 cups shredded zucchini on the large grate. Put the grated zucchini on a clean dish towel or cheese cloth, pulling up the sides of the towel and squeezing hard to release most of the liquid through the bottom of the towel.  After you squeeze and release most of the liquid, let the zucchini sit while you mix up the rest of the ingredients.

In another large bowl, whisk together oil and sugar until smooth.  Add in eggs one at a time, mixing after each addition.  Add vanilla.  Add flour mixture to oil mixture and combine.  After combined, fold in chopped walnuts and zucchini.

Spray a 9 x 9 pan with cooking spray.  Pour mixture in prepared pan and bake at 350 for 40 - 50 minutes.  (mine took about 55 minutes to get the center done).  Don't over bake but bake until a toothpick inserted comes out clean. Cool 15 - 20 minutes on a wired baking rack.  Serve warm with butter.

Printable Version
Posted by Susan at www.ugogrrl.com at 8:00 AM