YAY - We are loving this No-Churn Ice Cream.  I LOVE coconut and chocolate.  I made the base and then added chopped Mounds bars, toasted slivered almonds and swirled hot fudge.  I thought it was fabulous.  However, the Mounds bars got a little hard and chewy when frozen.  Chris said he would have preferred the coconut ice cream with just toasted coconut and slivered almonds with the swirl fudge.

Give it a try.  Be creative.  I was talking to my friend Barb and she and her family made a No Churn ice cream with chocolate chunks and slivered almonds.  They also made a Cherry Crumble similar to the Blackberry Crumble one I made.  I do have a few other ones I would like to try - maybe Banana Pudding and one involving Toffee and Chocolate. 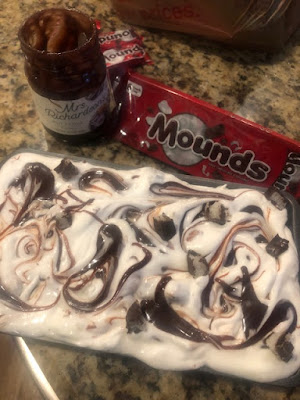 I did grab a quick pic just before putting it in the freezer!  Yummo!

Using a mixer, beat the whipping cream on high for 8 minutes or so or until a stiff peak is formed when the beater if lifted.  When stiff, fold in the Cream of Coconut until it is very well blended.  Use mixer if needed.

Fold in as many chopped Mounds bars as you would like.... or toasted coconut.  The ice cream is so amazing, leave out the Mounds and toasted coconut and just add 1/2 cup toasted slivered almonds.  Layer half of the mixture in a loaf pan.  Swirl several tablespoons over the ice cream, add the rest of the ice cream and swirl more fudge.  Sprinkle with reserved toasted slivered almonds. Cover with plastic wrap and freeze 8 hours or over night.

Enjoy!  Be creative!
Posted by Susan at www.ugogrrl.com at 6:55 PM